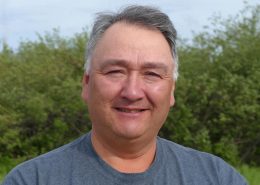 Allen Gordon was born in 1965 and is from the community of Kuujjuaq. He began his working career as a research student at the Makivik Corporation Research Center during his high school years. After high school, Allen was hired by Makivik as a wildlife technician for 5 years. The community members elected Allen as a Municipal Council member in 1994 and acted as Deputy Mayor for 2 terms up to 1997. Soon after, he was elected President of the Nayumivik Landholding Corporation of Kuujjuaq until 2016. During his career, he also managed the start-up and implementation of Nunavik’s first Arctic Char Hatchery from 2000 to 2015. He has won several awards of recognition including the Romeo Leblanc Responsible Fisheries Award in 2002 as well as being named Fellow to the Canadian Geographical Society in 2014. Allen presently is the Executive Director of the Nunavik Tourism Association, supporting tourism development in the region. He also owns a dog team and has raced in the annual, regional Ivakkak dog sled race six times, winning the event once in 2014. Allen has a passion for the land and his Inuit culture. He owns an outfitting camp near the community and provides eco-tours for tourists to enjoy the land with him.